Being In MWC Should Not Exclude CSU In Tourney 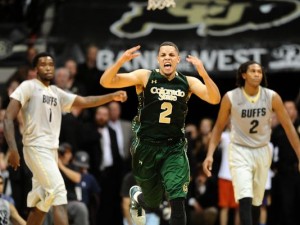 After Colorado State had a terrible 59-48 loss to Wyoming last Wednesday, the discussion was about how this loss could have an impact on CSU when it comes to their NCAA tournament hopes.

Then, there was talk about how Colorado State saved their season by rallying from 18 points in the first half to beat UNLV in an 83-82 victory Saturday at Moby Arena. This came after UNLV freshman guard Jordan Cornish missed a three that could have gave his team a road victory.

It’s funny people are talking about the CSU Rams as a team that is fighting for a tournament berth despite winning their 21st game of the season after a 70-59 victory over New Mexico at Moby Arena last night.

For a team that has won 21 games this year overall and won eight games in conference play, that should be good enough for CSU to participate in the NCAA’s March Madness.  If CSU played in the Big 12, they are in. Since they are in the Mountain West Conference, the NCAA tournament committee may not feel the need to add more than two teams in an obscure conference.

In other words, more teams in the power conference are allowed since they draw ratings and crowds. That’s why CSU has to find a way to get into the Big 12 conference sooner rather than later, so that they can play in marquee playoff games.

It’s ridiculous CSU may be penalized because they play in an obscure conference no one knows. The MW is not a joke of a conference. There are many good teams that play there such as Wyoming, San Diego State, Boise State and CSU. Even the bad teams to mediocre teams can beat the great MW teams on a given night, which is why this conference is not easy to play in.

Colorado State earned eight conference wins this year. Those wins were never easy with the exception of last night.

There’s no shame losing to New Mexico, Boise State and Wyoming on the road this year. Those three teams are good in their own right. They could have beaten Wyoming at home, but Wyoming may be the best team in the MW this year.

CSU’s four losses aren’t as bad as people made it out to be.

Fortunately for them, ESPN’s bracketologist expert Joe Lunardi has Colorado State in the tournament. That is encouraging, but CSU has to win out.

CSU can make a case to the NCAA tournament committee by beating San Diego State on the road Saturday. That will be another quality win on their resume to go along with wins against Boise State and San Diego State this year.

It isn’t fair CSU has to fight it out. Compare them to other mediocre teams in a power conference such as the Big East for example, Colorado State stands out more. They have beaten good teams unlike their competitors that are fighting for CSU for a tournament spot.

Last year’s Colorado team made the tournament, and they weren’t that impressive. It would be a joke if this year’s CSU team misses the tournament despite winning twenty-something games while CU made it despite being a middling team last year. If CU played in a nondescript conference, they wouldn’t have made it last year.

Being in a power conference matters, and that’s the problem CSU faces.

CSU can’t think about their fate right now. They need to keep winning. That should be their only concern. If they win, everything takes care of itself.

For my money, CSU will be there. They are a good team. They are good enough to keep winning and winning the tournament. They are in a position where they can control their fate by winning.

CSU coach Larry Eustachy should look at his team fighting for a tournament spot as a good thing. It would have him make his team focused. He has every reason to get on his players to focus with the idea it’s not a sure thing to make the NCAA tournament.

It is not fair. It shouldn’t have to be.

Shame on the committee if CSU is not good enough to play in the March in their eyes.