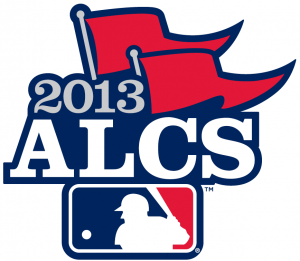 The MLB Playoffs are down to their final four and the American League matchup is a very good one.  The Boston Red Sox have home field advantage against the Detroit Tigers.

This is a very tough matchup to predict because both teams have great hitting and pitching and every game has the potential to be a nail biter.  The Tigers are coming off a very emotional Game 5 against the Athletics with Justin Verlander pitching 8 innings while allowing only 2 hits.  The Red Sox handled the Tampa Bay Rays in four games, and seemed to be in control for most of that series.  This game is going to be very emotional and competitive and the winning team will fully deserve to play in the World Series against either the Dodgers or Cardinals.

These two teams boast four of the best pitchers in the American League with the Tigers having Justin Verlander and Max Scherzer and the Red Sox throwing Jon Lester and Clay Buchholz.  Since the Tigers, A’s series went five games, Scherzer and Verlander are unavailable for Game 1 so it will be Anibel Sanchez facing Jon Lester.  Game 2 will have Clay Buchholz facing off against Max Scherzer and Game 3 will have John Lackey facing off against Justin Verlander.  Just judging off the pitching matchups the Red Sox should take Game 1 and the Tigers should take Game 3, so whoever can sneak out Game 2 will have the advantage going forward.  However, both teams have a high powered offense so either team could go off at any moment and knock one of these great pitchers out of the game early.

Again, these teams are very evenly matched when it comes to both of their lineups.  The Tigers have their 3-4 punch with Prince Fielders and Miguel Cabrera while the Red Sox have the power of the beards with Ortiz, Pedroia, Napoli, and even Jonny Gomes stepping in some big spots.  My big concern for this series is Miguel Cabrera because he has been nursing an injury which as hindered his ability to hit the long ball.  He did hit a home run in game 5 against Oakland but that was his first home run in almost four weeks.  If the Red Sox pitching staff can keep Cabrera’s bat in check that will go a long way into stopping this Tigers offense.

In my opinion, this is where the series will be won and lost.  Whoever can build up the other team’s starting pitching and get to the bullpen and make some noise there has the best chance of winning. Both bullpens have been stellar, so one team is bound to cough up a run here or there and that will make a huge difference.  The closers, Koji Uehara and Joaquin Benoit will have a ton of pressure on their shoulders every time their team has the lead and whoever can handle that pressure the best and close out games efficiently has a huge edge.

Overall this series has all the makings of going the distance, and I believe that it will and with Game 7 being at Fenway Park, I am leaning towards the Red Sox in 7 games.