Bridich Must Be Proactive To Trade His Stars 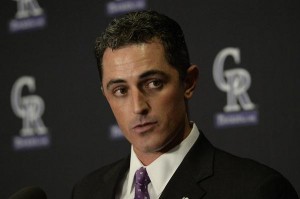 Newly-promoted Rockies general manager Jeff Bridich knows what Rockies fans are thinking. He knows they are cynical about him being the general manager since he was part of the Rockies management team that built bad teams in recent years. He understands he has work to do for him to earn their respect.

Birdich has said the right things about wanting the Rockies play games in October. He talked about wanting to change things up. That’s all well and good, but these are nothing more than clichés at this point. Being the bright guy he is, he acknowledges that.

The Rockies general manager has to make changes. The core players have been the same for the last three years, so it shouldn’t be surprising the team had three losing seasons in a row. No one should be untouchable after a 66-96 campaign by the Rockies this past season. This is a team that has been 204-282 in the last three years.

The only way Birdich can make an impression is if he gets value for Troy Tulowitzki or Carlos Gonzalez. He is going to have to get a bounty for his stars. That isn’t going to be easy.

The Rockies have two injury-prone stars that are making plenty of money. That is not a good combination. The big-market teams are happy to pay these guys if they were healthy. That’s the problem. They aren’t. If they were healthy, the Rockies would be winning, and they wouldn’t have any reason to trade either of them.

Birdich knows he has to find a way to trade one or both of his stars. That’s what he is being paid to do in his new role. The Rockies have to do something to improve. It can’t be more of the same anymore, and he knows he can only improve the roster by trading one of his stars.

Tulowitzki and Gonzalez have done the best they could in leading the Rockies. They should be commended for staying with the organization rather than serve their time and planning to move on. They were committed to building a good thing for the Rockies. It hasn’t happened. Injuries and poor roster did them in.

The Rockies are going to stink with or without them in the next few years. They might as well try to start a new foundation by trading either or both of them.

Gonzalez is Birdich’s best bet to trade. He’s affordable for most teams. He still has four years to go on his contract. He can be counted on to play if he can be a designated hitter. He has some sort of value. A team like the Red Sox could use him in the outfield, and they have good players in the farm system that the Rockies could use.

He has had injuries, but he also had years where he has not had injuries. He is not as bad as Tulowitzki.

The Rockies shortstop is going to be hard to trade. He gets hurt every year. His contract lasts until 2021. There’s no way teams are going to pay him that type of money to play when he’s always hurt.

The Mets were thought to be a fit, but they are not giving up their young pitchers for a guy who is too expensive for them.

The Yankees are interested, but it would be foolish for the Rockies to trade him and get nothing in return. Yes, having the Yankees take on his contract would be financial relief, but Birdich would lose credibility right away if he traded his shortstop for spare pieces. He might as well keep his injury-prone star.

Birdich’s task is not going to be easy, but it’s his job to get it done. That’s why he was promoted to be the new general manager. To find a way to unload one of their stars.

He should also trade either Charlie Blackmon or Corey Dickerson for a starter. A starter who can step in the rotation and win games. A starter who can be a #3 starter to complement Jorge De La Rosa and Jordan Lyles. That’s a guy Birdich should target.

Birdich can’t do an unheralded trade. Yes, the Rockies did a good job getting something out of the Dexter Fowler trade in getting Lyles for him, but they need to make a franchise-changing move.

This is a team that needs to rebuild as painful as it sounds. These last few years have been awful. It won’t get any better next few years. They might well as get young players from other team’s farm system to build around.

Birdich was hired for a reason. That is to make this team better.

He is going to get his shot now. It’s what he has dreamed about when he got the job.

We are going to find out what he is all about this offseason. There won’t be a learning curve here.

It’s about getting a deal done to improve the team.

First impressions matter to fans, and Birdich knows this as much as anyone.

He needs to seize this opportunity this offseason.

Good luck to the rookie general manager. He is going to need it.