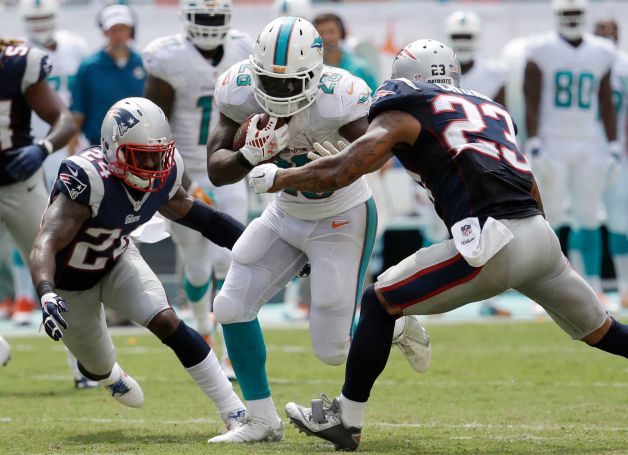 The NFL football season kicked off on Thursday with the Seattle Seahawks drubbing of the Green Bay Packers. And it was in full force Sunday with eye-raising surprises and comebacks attempts.

Coming into the NFL season, the New England Patriots were, according to some, to be the best team in the AFC. They lost handily to the Miami Dolphins 33-20 that brought a vastly improved defensive front. One has to speculate that Bill Belichick’s and Robert Kraft’s bizarre moves limited the weapons for quarterback Tom Brady, which could signal a downfall for the franchise.

One of the surprise upsets of the weekend was the Buffalo Bills defeat of the Chicago Bears. The Bills drafted Sammy Watkins to be the number one receiver in Buffalo and help their young quarterback EJ Manuel this season, but it was the defense that showed more promise than expected. They stymied quarterback Jay Cutler, who threw for two touchdowns and two costly interceptions. The Bears successes this season hinges on the shoulders of Cutler.

The two teams which showed off their dominance were the Seattle Seahawks and the Denver Broncos. Both teams were in the Super Bowl last year and each looked ready to get there again, although the Broncos allowed their opponent to make the game closer than it should. Of all the teams that showed dominance from quarter to quarter, it was the Seahawks. Green Bay is one of the top three teams in the NFC and given the toughness of the Seahawks at home, it should have made for an exciting game. It was not interesting for less than one half of the game. Seattle beat Green Bay convincingly, affirming to the league that they are the team to beat.

The Broncos impressed in their season opener against the Indianapolis Colts. One of the many question marks heading into this season was the improvement of its defense. Safety Rahim Moore came up with two huge interceptions, one with the disruptive assistance of new cornerback Aqib Talib. Talib seemed to have a wide impact throughout the game. Colts receiver T.Y Hilton was shut down and the defensive backs kept nearly every pass in front of them. But, as quarterback Andrew Luck has shown in his brief two-year career, he will always give his team a chance to win. That was the case last night.

The Cleveland Browns started the season against the Pittsburgh Steelers. Brian Hoyer, the Browns quarterback, showed he still had magic left over from last season as he led his team back from a 27-3 deficit to tie the game in the fourth quarter. But it was for not, as the Steelers prevailed 30-27. This should impress the Browns faithful with how Hoyer battled from adversity to nearly defeat the Steelers. If Hoyer continues to play this way, then it might be difficult for rookie quarterback Johnny Manziel to see playing time this season.

One thing is for sure, the NFL season is back and it did not disappoint. The boys of fall are in full-throttle mode, so buckle up and hang on to your seats. 2014 season promises to provide excellent entertainment.