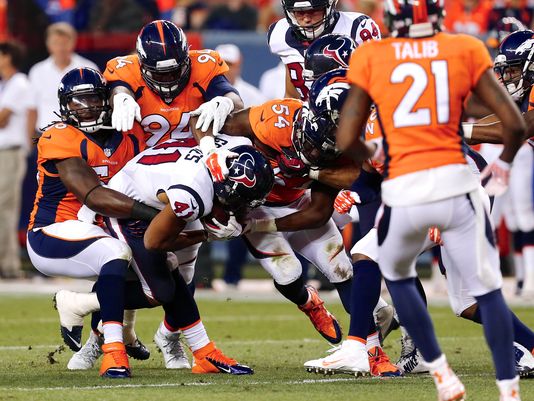 The first week of the 2014 NFL regular season did nothing to dispel the notion that Super Bowl 49 will be anything other than a rematch of Super Bowl 48.

The Seattle Seahawks opened the season in superb fashion, handily dismantling the Packers’ high-octane passing game, and gashing their defense on the ground. The Broncos rode a Julius Thomas hat trick to an early lead over Indianapolis, and despite a late run from the Colts, held on for an impressive win.

First and foremost, the Broncos signed a future hall-of-famer in Dallas sack-master DeMarcus Ware. Ware boasts 117 career sacks, seven 10-plus sack seasons, and 32 forced fumbles. An NFL 2000’s All-Decade team member, he has led the NFL in sacks twice since being drafted in 2005.

Ware has spent much of the past two seasons injured, but the potential he carries is worth the risk the Broncos have assumed by signing him. With Denver, Ware will not be asked to be the entire defense as he was with the woefully hapless Cowboys in recent years. The lower expectations should help Ware regain his health and productivity.

In addition to Ware, the Broncos also brought in free agents T.J. Ward from Cleveland, and Aqib Talib from New England. Both players are proven studs in the secondary. At 27 years old, Ward is coming off a highly productive run in Cleveland, where he totaled more than 100 tackles in two seasons, and intercepted five passes. He is in the prime of his career, and poised for superstardom in Denver.

Talib was acquired by New England from the Buccaneers amid a flurry of legal and off-the-field issues in the middle of the 2012 season. Since then, Talib has improved his behavior and built a deserving reputation as one of the NFL’s best cornerbacks.

Comfortable leads give defenses the green light to run high-risk, high-reward blitz and coverage schemes. Because it often had the benefit of playing with a considerable lead, the Broncos defense’s play actually exceeded its talent in 2013. Defensive coordinator Jack Del Rio’s liberal style made stars out of formerly pedestrian players like inside linebacker Danny Trevathan and blitz specialist Shaun Phillips, the latter of whom left Denver for Tennessee via free agency.

A weak link for the Denver defense remains at inside linebacker where Trevathan is out with a fractured knee; however, replacement Nate Irving showed well in week one against the Colts, evidencing the idea that Trevathan’s impressive 2013 season was a result of the system rather than of individual talent.

While it is unfair and unreasonable to expect the Broncos to achieve the same offensive heights they reached in their remarkable 2013 campaign, it is entirely sensible to expect the defense to take a big step forward with the additions of Ware, Ward, and Talib. As terrifying as it may be, the Broncos are an even better team in 2014 than they were in 2013.