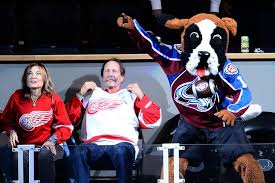 The beauty of high-definition television is anyone can see anything on a large screen, especially in a hockey game. There are no hidden secrets. HDTV can make a picture worth thousand words. It showed last night in the Avalanche’s contest against the Red Wings.

80 percent Red Wings fans and 20 percent Avalanche fans filled the Pepsi Center. That picture does not lie.  It was a home game for the road team. It had to be surprising for the Red Wings and Avalanche, considering it used to be 50-50 percent fanbase filling the Can back when those two teams were in the Western Conference.

The Red Wings fans left the Pepsi Center satisfied. Why not? They had their money’s worth with their team being victorious in a hard-earned 3-0 victory against the Avalanche. It was hard-earned since it was a 1-0 game in the third period until the visitors scored two shorthanded goals after Avalanche head coach Patrick Roy took Semyon Varlamov out to generate offense for his team.

There’s no question the Avalanche players were disgusted at the lack of support by their fanbase after the game. Roy clearly was not happy in his presser. It’s hard to blame them when the team has worked hard to change the culture and put on a quality product.

It’s not only the other team’s fanbases such as the Blackhawks, Red Wings, Blues and Bruins that fill up the Pepsi Center that should bother the Avalanche.

Too often, the Pepsi Center is always dead when the Avs play. Either fans are bored or they don’t care to pay attention. They go to games to be seen and heard. It’s like watching a sporting event in Southern California.

When the Avalanche played the Predators at the Can last Friday, there was no emotion or noise emanating from the Avs crowd. The building was not sold out. It was a game the Avs needed to keep up in the wild-card race. It was a great game that did not get the attention of the fans for only reasons that can’t be figured out.

Even in the playoffs last year, Avs fans were more tentative than loud. They were waiting for something bad to happen. The place was quiet in Game 7 last year. There was the atmosphere of doom by the crowd after Varlamov blew four leads to work with.

Still, last year’s success does not get fans to watch Avalanche hockey or put their heart and soul to the team, especially when the team lost Game 7 at home to a Wild team they should have beaten in that game and in that series.

The Avs were popular when they came to town because they won the Stanley Cup in their first year in town during the 1995-1996 season. They were contending for Cups year in and year out. That’s how they were able to get fans to come to their games.

Fans are not going to invest their time in their town’s team unless they are a great product. Chicagoans and Detroiters are no different than Denverites. It wasn’t long ago no Chicagoan cared about the Blackhawks since they were the worst team in hockey yearly.

Roy may have been politically correct last night when he said it’s going to take time to get fans to come, but there’s truth to it. The Avs need to sustain excellence. They need to contend for Stanley Cups.

Maybe Avs fans know better. They probably know the Avs are not good enough to be a playoff team for them to care. With the Avalanche struggling to score on the power play by going 0-for-22 overall and 0-for-3 last night in last night’s loss, it’s hard to get excited about them. This is a team that can’t score, and that’s why the fans are going to be passive.

Despite the Avs fans being tentative, it was surprising not to see them show up with the Red Wings in town. After all, there is a history with between the home team and the visitors. The thought was the presence of the Wings would fire a struggling hockey town up. It never happened.

The lesson of all this is Denver is a what you have done for me lately town.

If a team underachieves or stinks for years, no one in Denver is going to care. Past means nothing.

The Avs are learning it the hard way.