Demaryius Thomas is Elite of the Elite 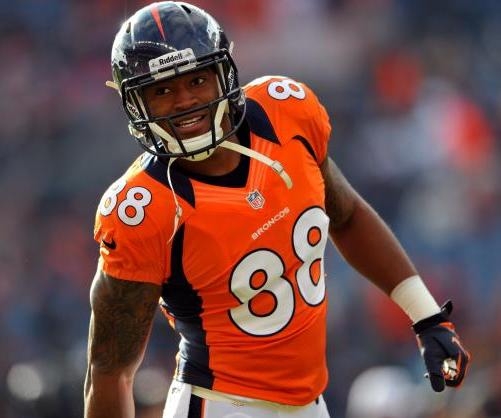 High expectations will always abound as long as Peyton Manning is under center. One player who can elevate himself as top-3 receiver in the league is Thomas. Thomas replaced Johnson at Georgia Tech in an offense primarily dominated by the triple option. Coming into the 2010 NFL Draft, Thomas’ route running was criticized. After a few years of refinement and working with Manning, Thomas’ transformation makes him more explosive than ever.

Manning has averaged targeting Thomas over 140 times the last two years, which is a big leap from the first two years of Thomas’ NFL career. Thomas also averaged 1,400 yards receiving the last two years. With Wes Welker being suspended for the first four games of the season due to violating the substance abuse policy, Thomas looks to be leveraged more.

It is not farfetched to think, with the loss of Eric Decker to the New York Jets, that the number of receptions for Thomas will increase and his yardage might even exceed 1,600. All of this will hinge on the chemistry Manning will have with newly acquired receiver Emmanuel Sanders. Either way, the Broncos are well equipped at the receiver position.

Thomas needs to assert himself more as a physical receiver. He brings great size, but he must utilize it better to expose the weaknesses of the cornerbacks in the league. Johnson revolutionized the wide receiver position with his size, quickness and strength. Thomas has the ability to elevate his game to the same level as Johnson. Thomas has the right attitude; he has the tools; he now has the chance to transform his game, and that of the Broncos, to complete fully elite status.

The Super Bowl loss to the Seattle Seahawks left a bad taste in the mouth of Thomas and the entire Broncos’ squad. Motivation is not lacking for Thomas and his teammates. What remains uncertain is whether or not this year will be the defining moment for him, especially as he enters the final season of his contract with the franchise. What is known is Thomas is ready to transform his game further in what is sure to make the Broncos’ front office do everything possible to retain him under a longer-term contract arrangement.

Johnson, who transformed the wide receiver position, has been called “Megatron,” named after the famed Transformers movie character, not for his villainy but for his sheer power and strength. Thomas is about to earn the nickname: Optimus Prime. As the movie character is famous for saying, Thomas is ready to hail the charge: “Let’s roll!”

One Response to Demaryius Thomas is Elite of the Elite