Losing to Seahawks Could Pay Off For Broncos 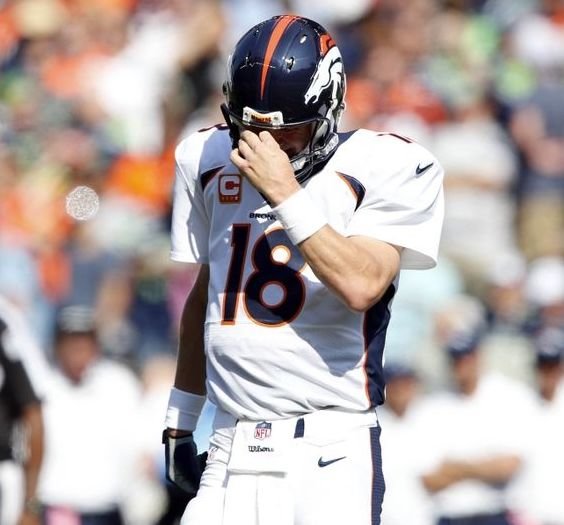 Several members of the Broncos such as John Fox, Chris Harris Jr. and Peyton Manning were encouraged after the game. Several Broncos players such as Wes Welker, Terrance Knighton and DeMarcus Ware did not share the same feeling.

The Broncos invested so much into their regular season game with the Seahawks going back to when the 2014 schedule came out. They wanted this game after the Super Bowl champs embarrassed them in a 43-8 Super Bowl loss at East Rutherford in February. It was not about avenging the loss. It was more about pride after their manhood was destroyed. It was more about trying to feel good about their Super Bowl chances against yesterday’s opponent.

The Broncos fared much better in this game, but in the end, they took a 26-20 overtime loss to the Seahawks at CenturyLink Field yesterday afternoon.

It’s understandable why Welker, Knighton and Ware were in no mood to celebrate a moral victory. They did not work hard  at practice all week and play well to lose, especially in Welker’s case after being cleared to play after having a concussion in a preseason game against the Texans.

Let’s face it. It was hard to believe the Broncos were winning at Seattle. The Seahawks were coming off a Week 2 loss to the Chargers in which Chargers quarterback Philip Rivers torched the Seahawks defense by throwing three touchdowns for 284 yards. There was no way the Super Bowl champs were going to put on a repeat performance at home and go 1-2.

The best the Broncos could settle was playing a good road game yesterday afternoon, and they did that. It’s what they needed to come out with after the game was over. It’s understandable why Harris and Manning celebrated a moral victory.

For the Broncos to beat the Seahawks, they needed their defense to do well. It seemed like that was a stretch after the way the defense struggled in the first two games. Yesterday, the Broncos defense showed they can be a great defense.

The Broncos defense was why the Broncos tied the game. The unit was physical with the Seahawks receivers often, and they were able to get to Seahawks quarterback Russell Wilson in the second half. They did not let Seahawks running back Marshawn Lynch run wild overall.

The Broncos defense was their offense in the fourth quarter.

With the Seahawks leading 17-3, Ware sacked Wilson at the Seahawks’ 1-yard line, and Nate Irving and T.J. Ward followed it up by tackling Lynch in the end zone. That was good enough for the Broncos to get two points via safety. The Seahawks’ lead was cut to 17-5.

Then, Harris intercepted Wilson’s pass after Aqib Talib tipped the Seahawks quarterback’s pass in the air at the Seahawks’ 32-yard line, and that set the table for the Broncos in a position to score. They did just that when Manning gave the ball to Julius Thomas, who ran to the end zone for the touchdown. It was a ballgame again as the Broncos cut the Seahawks’ lead to 17-12.

The Broncos defense did their job all day. Now, the onus was on Manning. This was his chance to make amends from what has been a horrible game from his end all day long. His throws were way off, and he focused on throwing dink and dunk passes often.

The Broncos quarterback started to get many first downs after throwing five one and outs from late third quarter to early fourth quarter. He was able to throw at the Seahawks secondary.

Now, he had to finish the deal by executing the two-point conversion for this game to go to overtime. Mission accomplished. His pass to Demaryius Thomas made this a tie game.

With the Seahawks defense being tired after being on the field all day, this was a chance for Manning to finish the Seahawks off. It never happened.

The Seahawks won the coin toss, and Wilson orchestrated a touchdown drive by running for first downs and handing the ball to Lynch to run to the end zone. Game  Set  Match.

The Broncos can only settle for a moral victory, and that is not a bad thing.

We know the Broncos defense can put on a good game, and they are not a finished product. That itself made this game encouraging from the Broncos’ perspective.

What should be encouraging is Manning may have figured out the Seahawks defense. That’s important. Yes, he wasn’t great, but he did not give in like he did in the Super Bowl. He grinded it out, and he found a way to make it happen late. Maybe if the game was at Sports Authority Field at Mile High, the Broncos may have won it. Maybe if the Broncos won the coin flip, Manning would have orchestrated the game-winning touchdown.

This wasn’t a moral victory some of the Broncos were celebrating.

This was them finding out that they can beat Seattle in a neutral setting in February if that Super Bowl matchup materializes.