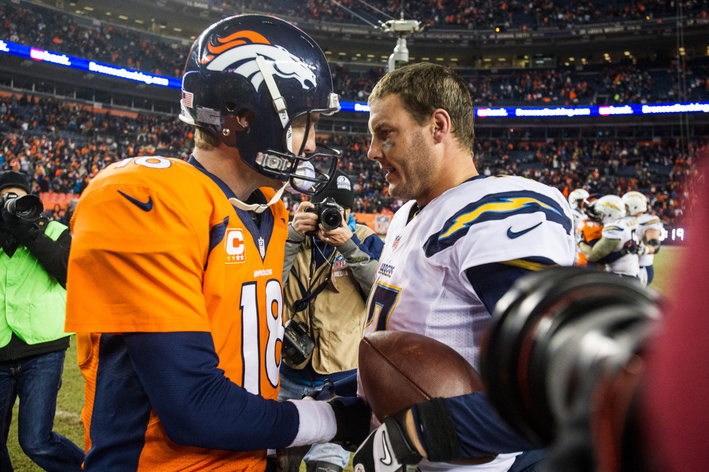 Philip Rivers for MVP? Chargers to threaten the Broncos in the AFC West? The second statement is still yet to be determined, but the Broncos put the Rivers MVP discussion to bed in their Thursday Night Football victory and proved why, for now, the Broncos are still the class of the division.

A year ago, the Broncos were ill-prepared for a Thursday night divisional showdown in the Mile High. The Broncos defense allowed over 170 yards rushing to the San Diego Chargers, and Peyton Manning suffered his first loss to an AFC West opponent in his tenure as a Denver Bronco. The loss came as an eye-opener, and issues came forward with those 2013-14 Denver Broncos.

The Broncos weren’t going to let another Thursday night match-up with the rival-Chargers sneak up on them. The winning gameplan was laid out in last year’s match-up in Denver, and the very same game-plan was set to be executed a year later. The obstacle getting in the way of that? Well you can start with the fact that the Broncos defense is a head over shoulders better unit than what took the field in the 27-20 loss back on December 12th. As mentioned, the Broncos allowed 177 yards rushing which gave the Chargers near 40 minutes with possession of the football.  A 24-10 third quarter lead at one point in that game had the Broncos shaking their heads.

With the defense inable to get off the field in last year’s match-up, and a Denver running game led by Knowshon Moreno that could only manage 18 yards on 11 carries, the entire team looked out of wack. Not so much the case this go around. Especially for the Broncos running game.

With Knowshon out of the picture, and this season’s then-starter Montee Ball sidelined with a groin injury, third-year back Ronnie Hillman gave the Chargers the very nightmares the Broncos faced against Ryan Mathews in that December match-up. Hillman had 109 yards on 20 carries, and might have finally put the last nail in the coffin to solidify his position as the Broncos starting running back. Rookie running back Juwan Thompson also got in the mix with two touchdowns to put on display the quite-possibly new dynamic tandem in the Broncos back-field.

An inability to stop the run by the Chargers, followed by a struggle to contain the pass, and we witnessed an all-around completely different outcome for the Denver Broncos in a Thursday night home match-up against San Diego.

Did I mention the change in defense? With the third-best defense against the run, the Chargers had no chance at repeating their Thursday night performance on the ground from a year ago. Missing Ryan Mathews and Danny Woodhead, the Chargers were left with Brandon Oliver to try and anchor the running game against the mentioned relentless run defense. From 177 yards a year ago, to 61 yards on 15 carries in this match-up, the Broncos defense turned out a completely opposite performance. With the talent of DeMarcus Ware and Von Miller on the outside anchoring that front seven of a completely different looking defense, the Chargers were in for a completely different night on offense than what they experienced a year ago.

Match that up with what Peyton Manning was able to do on offense with both starting cornerbacks out for the Chargers which led to three touchdowns to Emmanuel Sanders, and you’ve got yourself a completely different outcome in 2014 which saw the Broncos increase their divisional lead to 2 games in the AFC West.

Talk was of Mr. Philip Rivers heading into this game as a possible MVP candidate, and talk turns right back to the sheriff himself, after another three-touchdown performance from Peyton Manning. The San Diego Chargers are still a pretty formidable opponent, but the Broncos showed why they, and not the Chargers, are still the class of the AFC West.

From one 2013-14 postseason opponent to another, the Broncos will now head to Foxborough next week to take on Tom Brady and the Patriots to begin a three-game roadie.