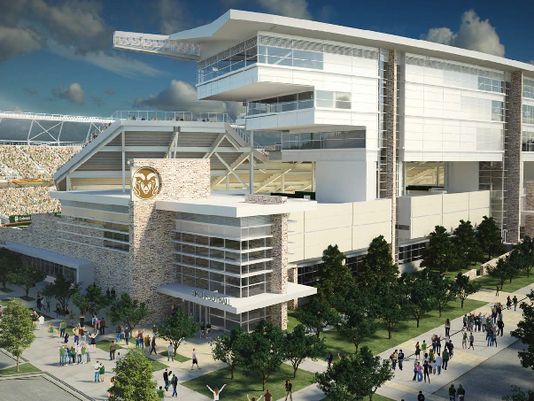 Talk about uplifting a fanbase. After CSU fans were concerned about the state of the Colorado State football program in light of CSU football coach Jim McElwain departing CSU to coach the Florida Gators, they received great news when they found out CSU’s new stadium project was approved yesterday afternoon.

This news was CSU’s best win in a long time. It has an impact on how the football program goes forward.

It has been known CSU needs a new football stadium to jumpstart their plan of going to the Big 12. It was not happening as long as they were playing at Hughes Stadium.

This stadium had to be done for Colorado State to be a major player in college football.

I had to admit I wondered if this new stadium project was even going to happen. It has been on and off issue. There have been people opposing it. It turned out to be a controversy. It was a headache. That’s why this came off as a surprise more than anything.

Now, Colorado State can think about the possibilities of what will happen with the new stadium coming soon. They can be a vibrant program in the state. They can recruit a good athletic director and a football coach. The programs can make plenty of revenue from football.

Colorado State will still be a stepping stone job for football coaches, but they can get a great coach who can continue to sustain a great tradition.

With the stadium being completed in 2017, they can get a coach like Scott Frost or Matt Lubick or Pat Narduzzi who can sustain excellence that McElwain created. There’s a good chance either of the three will stay around when the stadium is completed. They need to put three good years before they can coach a Power 5 conference program, so they should be around when the new stadium is completed.

This should help recruiting. Now, CSU can get recruits to stay in the state of Colorado. They can tell those stars in Colorado that CSU is the place to be to develop as players and achieve their dream of going to the pros. With better coaching and the new stadium, the university can make it happen.

With success, there’s a chance Big 12 could use Colorado State and maybe several Mountain West conference teams as part of expanding the conference.

Colorado State has had good history in college football. No, they were never contending for national championships, but they have developed good players and won games. They can be the next Michigan State or TCU with the stadium being completed.

Colorado State president Tony Frank won’t credit former athletic director Jack Graham for making this dream a reality. They never got along in trying to make this stadium work.

It would be foolish not to credit Graham. He is the one that has been persistent and dedicated to make this stadium project realistic. He raised plenty of funds. He had boosters donate money for this to happen. He somehow made it work. He was the only one that did not give up.

It’s too bad Graham is not the AD when this news happened. This should be his day to enjoy. This stadium does not happen without him. He was the only competent guy that knew how to get it done.

The new stadium should help CSU and their fans get over McElwain.

It should give the university a boost to move forward and get the right guys.

That’s why yesterday’s news was something this program needed in the worst way.