Breaking Down the Broncos Month Ahead 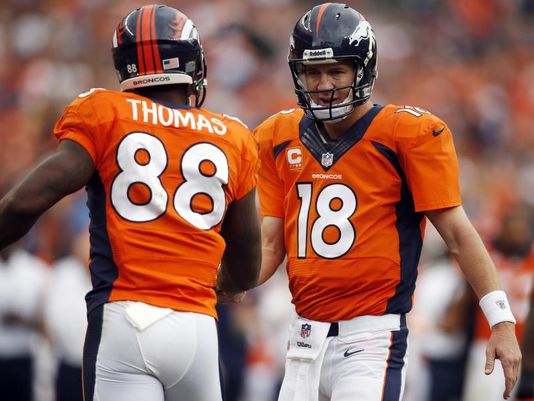 The Denver Broncos have had a terrific start to the 2014 season. Their only two losses have come on the road, with one to Tom Brady and the Patriots and the other to the defending Super Bowl champion Seahawks.

Other than those two understandable blemishes, Peyton Manning and co. have looked as good as ever and carry a stellar 7-2 mark into the second half of the year. To see how much better they’ll get along the way, let’s round out the Broncos schedule, by breaking down their games, as well as the value of Broncos tickets:

Denver Broncos tickets offer insane value in week 11, when Denver’s elite offense heads to St. Louis to take on the lowly Rams. St. Louis benched quarterback Austin Davis for veteran Shaun Hill, which is nothing but good news for the Broncos. Denver is the immense favorite regardless of who the Rams throw out there on offense, as Jeff Fisher and company will need some serious trickery to have any hopes of hanging around in this one.

Games in Denver aren’t cheap, and Miami fans will see that firsthand when they try to purchase Dolphins tickets this week. It’s still a game worth paying a steep price for, though, since Miami is in contention for the AFC East crown and will badly need to stay hot in order to keep up with the first place Patriots.

They need the win, but that doesn’t mean they’ll get it. The Broncos tend to be a different beast at home and we’ve seen this solid Miami defense get whipped around by top tier offenses. Denver certainly qualifies as such, so look for them to take care of business at Mile High.

Denver finishes November with a huge week 13 clash at Arrowhead, where the currently 6-3 Chiefs could be ready to contend for the top spot in the AFC West. KC will undoubtedly have to enter this battle at 8-3 to do so, but if they do they’ll be setting up a matchup that should garner loads of hype.

Denver had full control throughout the first meeting, but this one being on the road makes it all the more interesting. Considering the potential magnitude of this divisional clash, fans are getting a major steal with Broncos and Chiefs tickets coming in at just over $186 on average. Denver should still top the Chiefs to end November at 10-2, but they could have a fight on their hands.