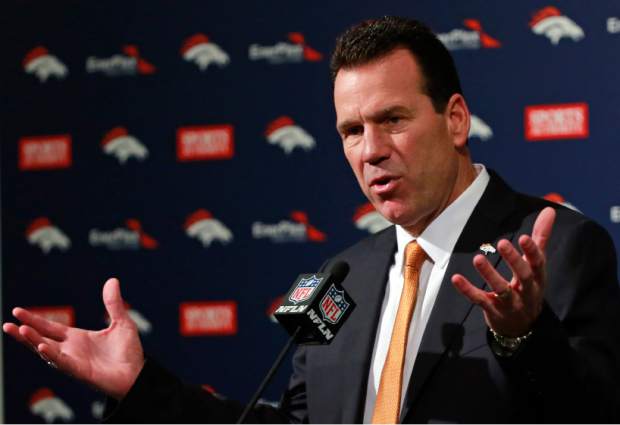 Widely considered to be one of the true model organizations around the league, the Denver Broncos enter 2015, as usual, with serious Super Bowl aspirations.

With four consecutive division titles under their belt — a stretch that also includes a recent loss in the Super Bowl — the Broncos will be in championship-or-bust mode in what could be legendary quarterback Peyton Manning’s final NFL season. With new head coach Gary Kubiak, Denver certainly will be one of the last teams left when all is said and done.

Manning has enjoyed one of the most eventful and dominant careers in NFL history since coming into the league in 1998. While he only has one Super Bowl victory to his name, the 39-year-old has put up arguably the most impressive statistics of all-time for any quarterback, and has numerous records, such as the much-celebrated one he set last year for most touchdown passes in a career. However, Manning would be the first to say that he’d rather have championships over historic statistics, and he’ll be gunning for that elusive second trophy in the upcoming campaign.

He certainly has the pieces around him, as the Broncos are loaded on offense, which is a big reason why they’ve led the AFC in points scored in each of the past two seasons. His two main receivers, Demaryius Thomas and Emmanuel Sanders, are two of the top targets in football, and despite losing Julius Thomas at tight end, they did manage to add Owen Daniels, a very respectable player in his own right. Additionally, they have depth at running back with C.J. Anderson, Montee Ball and Ronnie Hillman, not to mention a really strong offensive line that gave up the fewest sacks in the NFL last season.

Furthermore, the Broncos possess an intimidating defense that makes them a complete team. There are a lot of big-name players on this unit, such as Von Miller, DeMarcus Ware and Aqib Talib, and it’s another reason fans and analysts alike view Denver as one of the elite franchises in all of football.

With another supreme effort towards a Super Bowl run on tap, there’s no question Broncos tickets, whether they be home games or on the road against any other NFL team, will command some of the highest prices around. According to Razorgator, here is their current most expensive and least expensive game of the year:

There are very few teams that can keep up with the Broncos’ high-powered offense. One of those very few teams is the Green Bay Packers, who, led by superstar quarterback Aaron Rodgers, boast one of the most efficient and explosive units in the league. It’s  no surprise to see this particular contest atop the list of most expensive games this season, as not only are they two of the more storied franchises in the sport, but they’re also both viewed as legitimate contenders to end up in the Super Bowl at the conclusion of the year. The Packers, as a matter of fact, narrowly missed out on a berth in this past season’s Super Bowl, after failing to recover a simple onside kick against Seattle in the NFC Championship game. They finished 12-4 — the same record as Denver — and will undoubtedly be in the mix, sporting much of the same roster from recent years. This could also be the final Rodgers vs Manning showdown, and as a result, tickets are obviously at a premium. Without question, this will go down as one of the top high-profile games of the entire NFL season.

Surprisingly, this is currently the lowest priced Broncos game, despite the fact that there’s enormous potential for a high-scoring atmosphere in this early-season inter-conference affair. Like Denver, the Lions are led by a quarterback who piles up big numbers annually, that of course being Matthew Stafford. He also has arguably the best wide receiver at his disposal, Calvin Johnson, who actually owns the NFL record for most receiving yards in a season (1,964), set in 2012. And you can’t forget Golden Tate, one of the better No. 2 wideouts in the game. Detroit was 11-5 a year ago and made the playoffs, so this game has the potential to be a crucial September showdown between two contenders. Due to their 2014 success, Lions tickets are fetching pretty good value. On defense, the Lions lost Ndamukong Suh, which could create a void that other teams may try to exploit. More likely than not, there will be an enjoyable amount of points in this one, more likely from both sides.