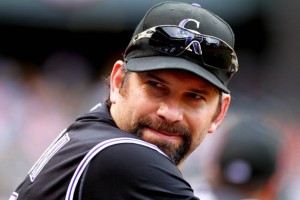 It was a vintage Todd Helton at bat in the seventh inning of the game today against the Reds. He battled to work the count full against Reds pitcher Curtis Partch, and then on the full count pitch Todd Helton became just the 96th player in Major League baseball to reach 2,500 career hits.

He laced the full count offering down the left field line and raced around first and headed for second base just like he had done 583 time before. He made it into second safely on a close play, and recorded his 584th double in his career. It was very fitting that his 2,500th hit was a double as he has made a career of doing just that. The crowd at Coors Field embraced the moment and gave Todd Helton a very deserving standing ovation. They all recognize that it is a rare accomplishment to reach the milestone. Todd Helton acknowledged the fans around by tipping his cap to the crowd and then looked up and waved to his family in the stands. Todd Helton is a stand up guy and has been the face of the Rockies franchise for 17 years and counting. He has left his mark on this franchise, Major League Baseball, and the entire state of Colorado.

The Rockies used their first round pick (8th overall) in the 1995 draft to select the two sport star from the the University of Tennessee. He wasted no time making a good impression in his first full year in the minor leagues in 1996. Combined over AA and AAA, Helton hit .336 with nine home runs, 28 doubles, and 64 RBI in just 114 games. Helton also impressed with his plate discipline as he walked 62 times and struck out only 49 times. He worked hard in the off season and that work payed off in 1997. He began the season at AAA and was magnificent during the year. He hit .352 with 31 doubles, 16 home runs, and 88 RBI in just 99 games. His work in AAA earned him a late season call-up for the Rockies and he began what has turned out to be one of the all-time best careers for a first baseman in Major League Baseball history.

Helton Made his debut for the Rockies on August 2nd, 1997 against the Pirates. He started the game in left field and wasted no time in getting his first Major League hit and RBI. He finished the game 2 for 4 with his first Major League home run. In limited duties in 1997 he finished the season with a .280 batting average with five home runs and 11 RBI. He did not get enough at bats to lose his rookie status so he was officially a rookie in 1998 and had a fantastic rookie campaign. Andres Galarraga moved on from the Rockies so Todd Helton began the year as the starting first baseman.

Despite all of that, he was discredited for playing most of his games at altitude and finished 5th in MVP voting, behind players who had much less impressive offensive seasons. He was selected to his first of five straight All Star Games and earned his first of four straight Silver Slugger awards. He has struggled with injuries in the last five years of his career, but when all is said and done he will own just about every Rockies offensive record.

Todd Helton has been relatively underrated outside of the state of Colorado and has not received much of the attention that any other player would have got with similar numbers simply because he plays the majority of his games at Coors Field. Either way you look at it, Helton has put up Hall of Fame numbers and should be strongly considered for the Hall of Fame when he is eligible five years after he retires.

He is a five time All-Star, four time Silver Slugger winner, and has three Gold Gloves sitting on his mantle as well. Right now he is 17th on the all-time doubles list and is 38th in the all-time extra base hits list. His offensive numbers should be worthy of his entry into the Hall but he also is one of the best defenders at first base in Major League history. He currently has the sixth best fielding percentage (.996) for any first baseman that has ever played the game. Todd Helton deserves the recognition for being one of the best there has ever been. He played the game the right way and more importantly to this generation, he did it clean. Pure talent and hard work led to his great career. Todd Helton truly is the face of Colorado Rockies baseball.

Dave is a Sports Administration Major at the University of Nebraska at Kearney. He interned for the Denver Nuggets and the Colorado Avalanche Group Ticket Sales departments. He's worked as an Event Manager for the Gold Crown Foundation. He has worked in sports through all facets of the game, and with Youth, High School, College, Minor Leagues, and Major Leagues at all different capacities.