Who’s to Blame for the Rapids Losing Streak? 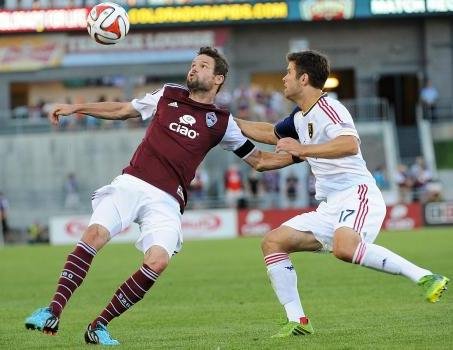 The MLS playoffs are closely approaching and teams are making a final push to qualify for a chance to win the MLS cup. However, the Rapids are doing the complete opposite. They have lost their last 4 games and are looking like 11 chickens with their heads cut off. The only way to solve the problem is to recognize where it’s coming from and deal with it.

Over the last 3 weeks, the Rapids have lost 4 straight games. Their goal differentials over these 4 games have been a whopping total of -8. This statistic screams for change in any shape or form.

During this spell of bad play, Pablo Mastroeni has continued to play the same players. Each week, the Rapids fall behind early and they have to play catch up for the rest of the game. But, it’s been the same players consistently making bad mistakes that end up costing the team the early deficit. Marvel Wynne continues to play Centre-back and continues to make mistakes. At least 1 goal from each match has been his fault. Yet Mastroeni is still putting him out to start the game. Wynne is a great player, but he is definitely not a Centre-back.

Pablo Mastroeni is probably the most iconic soccer name in Colorado. Playing for the Rapids for 11 seasons as well as playing for the USA in the 2006 world cup hosted by Germany, his name has definitely been heard around the state. After he retired last year, he felt there was no need for a break from soccer and he immediately came back to the team that gave him a championship with hopes to return the favor. The start of the season went very well for Pablo, as the Rapids were always near the top of the table. But after the World Cup, the Rapids seem to be taken a sudden plummet to the land of no playoffs. The biggest finger to point to the problem would be the very lackluster defense. But why does Mastroeni keep picking the same guys?

The Rapids defense has been horrendous these last 4 games having given up a total of 11 goals. Chris Klute continues to be wrongly placed in the right side Fullback position where he does not feel comfortable. Marvel Wynne has no clue what he is doing in the Center of the defense. As well as Drew Moor still making silly mistakes near his own goal. Shane O’Neill will definitely help get the defense get back in form once he returns from injury. But until then they need to do something different. If they are giving up an average of 2.75 goals a game, Pablo should at least be trying different defenders out because the ones we are using are not working. The Rapids have other defenders that Pablo Mastroeni should at least give a shot before the season gets to out of hand. If Mastroeni can’t seem to figure the defense situation out, it is going to be a disappointing first season for the manager.

While the Rapids have lost 4 straight games, they still have time to fix their season with 10 games left till the playoffs. Hopefully, Pablo can help lead his team to a final push to the playoffs otherwise people might start wondering if he was truly the right man for the job. The Rapids next game is against LA Galaxy on August 20, at Dick’s Sporting Goods Park with kick off at 7:00PM.