Broncos Are Better Off With Peyton 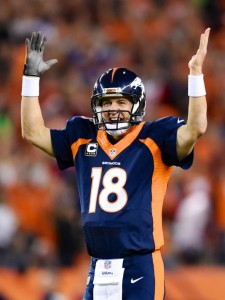 When John Elway had the season-ending presser yesterday, he spent more time talking about Peyton Manning than the coach he fired in John Fox. He felt that was more important than talking about a coach that he discarded.

The takeaway from this presser was Elway wants Manning back for another season. He seemed optimistic his quarterback could come back next year.

Who can blame the Broncos boss for wanting his quarterback back? It beats watching Brock Osweiler under center. The Broncos are a better team with Manning than they are with their backup quarterback.

No, Manning’s presence does not make the Broncos a Super Bowl contender anymore. The best he can do is taking them to the playoffs, and that’s it. Still, it’s better than nothing. The team will be watchable with Manning than Osweiler.

Sure, it’s a small sample size, but Osweiler has not given a moment where one says he is going to be anything special. He hasn’t been developed well, and it’s hard to think he will do anything in the NFL.

The Broncos are better off with Manning. They will win games. They will be fun to watch. They have a chance to do something.

Now, there’s risk involved with him. His body will continue to break down as he keeps getting older. What we saw will be the norm. It’s hard to think he can be healthy and productive all season long.

Still, the Broncos should take a chance with him and hope for the best. They signed him to a long-term deal, so they might as well get something out of it. It’s hard to say they are better off without Manning.

As for Manning, it’s hard to believe he is retiring for many reasons.

For one thing, he is not turning 20 million down. No one does.

He does not want to leave on a bad note after a terrible performance by him in the Broncos’ 24-13 loss to the Colts in the divisional round Sunday. The image of Broncos fans booing him is not what he wants to remembered.

The future Hall of Fame quarterback does not want to deal with life without football. He is not ready for it. He feels he has so much to offer at 39. He is not going to let one bad month convince him to retire. He played like a MVP for the first two months of the season. After he was hurt last month, things went haywire for him.

Manning feels he can overcome the injury. He feels he has the strength to play well at 39. He feels the injury he had was a fluke, so he will keep going for one more year. Next year might be a different story, though.

While everyone thinks the Broncos’ window of opportunity is slammed shut. Manning does not think that way. He feels he can lead the team to the Super Bowl if he is managed properly.

Which brings us to Broncos offensive coordinator Adam Gase.

There’s a good chance Gase is the favorite to coach the Broncos in 2015 season after the 49ers hired Jim Tomsula to be their head coach. He is the only coach Manning trusts.

What Manning says, goes, With Elway desperate to keep his quarterback happy, he will give Gase a chance to coach for a year and assess after next season.

It might be the right idea to hire Gase since there are not many candidates that have a wow factor in them. Sorry, but Gary Kubiak does not float anyone’s boat. He seems more inclined to be an offensive coordinator than be a head coach. Mike Shanahan? Stop. The game has passed him by.

Gase being the head coach would convince Manning to come back.

Elway will do all he can to get Manning back. He knows how valuable his quarterback is. He is determined to win a Super Bowl next year even if the odds are against them, and that’s why he has motivation to get his quarterback in the fold.

For the Broncos’ sake, they need Manning to be back if they want to compete for a playoff spot next year.

Manning should come back to atone for what happened last month and in the playoffs. He owes it to the Broncos, and most importantly, himself to come back,

A good thing should not come to an end due to a bad month and a playoff game.

Manning deserves one last chance to finish his Bronco career on a great note.

It would be the best interest of everyone that Manning comes back next season.