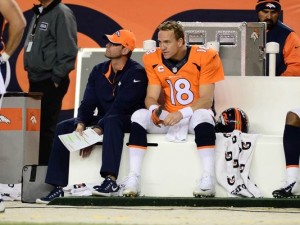 It wasn’t the Broncos beating the Bills that people talked about after the game. It was about Peyton Manning’s 51-game touchdown streak ending yesterday afternoon. There were many questions about it on Twitter, message boards and sports radio.

When there is a motive, there are always questions when this is not the norm.  No one is used to this. Not even Manning.

Broncos head coach John Fox claimed his star is not. He mentioned he wanted to incorporate the running game in the last few weeks with C.J. Anderson’s emergence as the Broncos primary running back. Manning says he is fine.

Go ahead and take them at their word, but remember something. Coaches, general managers and players never tell the truth to the media. They feel it’s beneath them, and they have zero regard for fans to tell them anything. Also, this seems strange.

First off, Manning is a perfectionist. He always orchestrates his own plays. His game is to go long. He likes to throw shots often. In a way, that’s his killer instinct. He is never a guy that throws dink and dunk passes. He is never a guy that will hand the running back many touches. He does not want to operate like a game-manager.

Everyone picks up on that when they saw the future Hall of Fame quarterback hand the ball to Anderson exclusively. It was hard not to notice. It’s rare he does this.

This idea Manning is on board about running a conservative offense is laughable. He does not take orders from Fox or any football coach when it comes to running an offense they prefer to run. He is his own boss. That’s the perk of being a great quarterback.

There are many theories out there about why Manning has not been himself.

There’s this idea about the Broncos wanting to see Anderson develop into a guy they can rely on in the playoffs. Running game will be a factor in cold-weather games in January, especially when they will likely travel to Foxborough for a playoff game against the Patriots. We all know Manning struggles at Gillette Stadium in his career, so they want to incorporate Anderson.

The problem with this argument is the Broncos had a good running back in Knowshown Moreno last year. He was a game-changer. Yet, Manning focused on throwing often. Moreno also had enough carries to put good numbers.

Maybe the Broncos quarterback found religion in trusting his running back. But this does not seem like his M.O. in his career.

This idea that the wide receivers are hurt does not pass the smell test. The Broncos have enough depth on offense to compensate the injuries the Broncos are having in Demaryius Thomas (playing through an injury) and Julius Thomas (did not play for third straight week).

People are talking about how cold weather makes Manning ineffective, so the Broncos want him to change his approach. As Denver Post columnist Mark Kiszla would say, that’s balderdash. He always likes to throw in the cold weather, and he is not going to change because of poor conditions. That’s not how he is wired as a quarterback.

This idea that being 38 can cause a quarterback to be ineffective late in the year is a bunch of crock. John Elway, Brett Favre and Joe Montana did fine in their late 30s in December. Tom Brady is doing well at 37 years old every week.

Maybe all of this is nothing, but it’s understandable if anyone is concerned. This has gone on since the Patriots game. It’s rare for him to be ineffective several games in a row. He hasn’t played at a high level since last month.

If Manning plays like he did yesterday in Sunday’s divisional showdown with the Chargers, there are going to be folks asking what’s up. There’s no way the Broncos can win Sunday with just handing the ball to Anderson. This isn’t Kyle Orton the Broncos are facing in San Diego. Philip Rivers is good for three touchdowns, so the Broncos are going to need Manning to be a game-changer, not a game-manager. If he can’t throw in that game, there is a problem with the weather being nice for him to throw.

Running game can’t be the be all end all. Yes, it helps to manage the clock and minimize Manning’s mistakes in the cold weather, but the Broncos are going to need Manning to throw deep often if they are going to win a championship.

If this is the Manning Broncomaniacs are seeing right now in January, the Broncos will not be hoisting the Lombardi Trophy.

That’s why there are questions. That’s why there is concern. It’s understandable if folks are freaking out. It’s what fans do, especially with the quarterback being the difference between winning the Super Bowl and losing in the divisional round.

Sunday has to be the day to allay their fears.

If not, they are going to want answers from the Broncos and Manning.