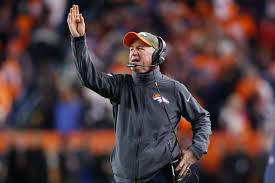 There has been angst about the Broncos not putting eye-popping numbers on offense for a month now. There are concerns about Peyton Manning not throwing touchdowns like he did the first two months of the season. Broncos fans have complained about this offense being boring.

Broncos head coach John Fox loves the Broncos winning ugly these days. He is a coach that likes to have games close to the vest. He likes to utilize the running game, and he likes his defense to be difference makers in a close game. That’s how he has always coached going back to his days as the Panthers coach. He coached like that when Tim Tebow was winning games for the Broncos.

The Broncos have won games lately by using C.J. Anderson to run the ball often and having their defense make plays. That means less of Manning, which has raised questions whether or not he is hurt. The Broncos use that formula in a 22-10 victory over the Chargers yesterday afternoon at Qualcomm Stadium.

Fox apparently told Broncos offensive coordinator Adam Gase to scale down the offense after the Broncos’ 43-21 loss to the Patriots last month. He thought the Broncos were one-dimensional by relying on the passing game. He felt that approach made his team predictable on offense. He wanted a balance offense, which features the running game complementing the passing game.

Fox knew Anderson was more than capable to rush for many yardage and break tackles. He also knows his running back can kill the clock and give the Broncos more possession on offense. That was the case yesterday afternoon when the Broncos had the ball for 32:44 over the Chargers’ 27:16.

The Broncos needed their running game more than ever yesterday afternoon with Manning being sick while playing with an injured shoulder. They ran for 111 yards yesterday overall.

Anderson has proven to be reliable since Fox and Gase gave the responsibility for him to run the football. The Broncos running back has ran for 679 yards on 148 carries with four touchdowns to show for it this season. In yesterday’s game, he ran for 85 yards on 29 carries.

With the Broncos primary running back doing well, Fox has a guy he can trust come January. That’s important since running game plays a role in victories in the postseason. Managing the clock is vital for a team to do well in January and February, and to manage the clock better, the Broncos need their running back to be effective. They have it in Anderson.

Anderson is going to come in handy for the Broncos next month. Odds are the AFC West champions are going to Foxborough to play the Patriots in a playoff game if that matchup materializes. Everyone knows Manning struggles at Foxborough, so he is going to have to rely on his running back to help him out. In the cold weather, running game is more effective than a passing game.

Fox knows this, and that’s why he told Manning that it’s best if Anderson runs the ball often. He wants his running back to get so much work in for him to be reliable in January.

For Manning, this is not what he wants to do. He can’t be happy, but he also understands that he has to do what’s best for the team. He has given it a try in giving the ball to Anderson, and it has paid off well. It’s hard to argue with the results.

So what if the running game results to field goals than touchdowns as the Broncos score the first nine points on Connor Barth’s leg. This is not about style points. This is about finding ways to win. It’s the way Fox likes it, and it has proven to be successful.

The Broncos’ 43-8 loss to the Seahawks in the Super Bowl has been magnified, so there has been so much overanalyzing about why they lost whether it’s lack of running game or throwing too many passes or the team not being tough enough.

Fox wants to try something different this postseason. He wants to get back to his roots that made him a good coach all these years.

So far so good.

Check back in January or February if this running game approach works.