Timing Is Right For Broncos Changes 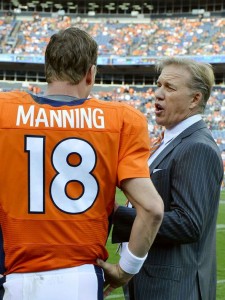 Give John Elway this. He is decisive when it comes to making decisions. He has a plan, and he executes whether it works or not. It’s that trait that made him successful as a football player and an executive.

He did not waste any time yesterday afternoon when he fired John Fox and his staff. He made up his mind long time ago. Only a Super Bowl championship would have kept Fox for another year.

Elway had the right idea to fire Fox. He saw enough of his head coach for four years to make this decision. He knew the Broncos went as far as they could with him. He wanted someone new that could lead the Broncos to excellence and maybe oversee a rebuilding project. That quote by him about how he and his coach disagree how to take the team to the next level should speak volumes.

It wasn’t a decision based on emotion or irrationality. This has been in the works for some time. It was clear the Broncos boss wasn’t happy with the way the team was coached in the Super Bowl last year, not to mention his team was unprepared against the Seahawks on Super Bowl week.

After that presser, Fox knew his job was on the line heading to the 2015 season. It was championship or bust. He knew Elway’s history of dumping coaches who he did not see fit whether he was a player or an owner of an arena football team.

That’s why he was floating this story to Fox Sports’ Jay Glazer that he could be fired if the Broncos lost to the Colts in the divisional playoff game. He also said he has teams lined up to interview him if he is fired.

The Broncos were outplayed, outworked and outcoached by the Colts, and Fox paid the price for it by being fired.

Still, head coaches can’t coach for life unless they have a track record of winning championships. It’s the nature of the beast. Fox knows this as well as anyone. This isn’t just a John Elway thing. It’s like that for most owners that own NFL teams.

It was time for the Broncos and Fox to move on. Four years is a long time in the NFL in this day and age. The Broncos head coach has showed he can’t win a championship based on the fact he never makes adjustments during the game. That was a sore spot for Elway, and that’s why he was gone.

What happens moving forward is another question.

No one knows if Manning is coming back. It’s going to come down to which one he wants as Broncos head coach. If it’s Broncos offensive coordinator Adam Gase, he will definitely come back since he is the only coach Manning trusts. The Broncos quarterback doesn’t want to adapt to a new offense at his age.

It remains to be seen if Elway wants Gase. He couldn’t have like what his offensive coordinator did in the playoffs the other day when he never made the adjustments. It was Manning throwing all the time rather than have Anderson run the ball. Maybe the Broncos offensive coordinator did not have the courage to tell his quarterback to stop throwing.

It’s hard to believe Elway will be pushed around by Manning here. The Broncos quarterback may think differently, but if it’s battle of wills, the Broncos boss will win it. That could mean Manning may retire.

It’s also hard to believe Elway wants to play the waiting game with his quarterback. That can take a lot out of the team as the Vikings found out with Brett Favre few years ago.

If Manning is gone, it’s an end of era. It probably is even if he is back. There’s no way the Broncos are a Super Bowl contender. That ship sailed.

That’s why it made sense for Fox to go. It also makes sense if Manning is gone.

It’s in the best of interest the Broncos start all over. As much as Elway likes to think this is a championship team, he has to know deep down that may not be the case.

Changes are bound to happen after three years of going after a championship with nothing to show for it.

The coach paid for his job, but there’s going to be more guys leaving when all is said and done.

That’s the way it goes after a playoff loss like Sunday’s.

It can’t be more of the same anymore.