Rockies September Baseball: What To Watch For 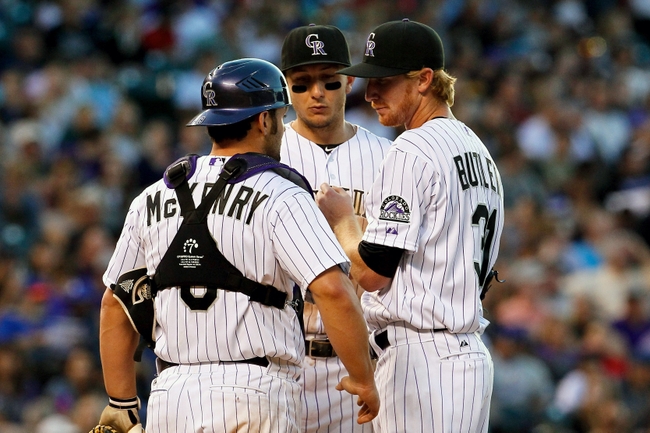 This season has been a difficult one to watch for many Rockies fans. For the Majority of the season they have looked like they are as far away from being competitive in the NL West as they have ever been.

However, they have the talent offensively; they will just need to harness some of the bullpen issues, which have cost them multiple games throughout the year. The calendar is about to turn to September, which means, the Rockies fans will be able to get a firsthand look at the future of the Rockies as they expand the roster to 40. The Rockies faithful will be pleasantly surprised by some of the talent they have waiting in the minor leagues and we will get a look at the future of the pitching staff as they will most likely call up Jonathan Gray from AA Tulsa in order to get his feet wet at the Major League Level.

First, let’s look at a few newer names that were called up a couple of days ago. Christian Friedrich made his return to the majors on the 27th and will most likely get a look in the bullpen and see if that is going to be a role that he can succeed in moving forward in the future. He has struggled this year at the AAA level with the Sky Sox as he has posted an ERA of 7.00 and has an abysmal record of 2-9. He has split time in the bullpen and the starting rotation, but has been unable to regain the talent which he displayed at Eastern Kentucky university which ultimately made him a first round draft choice back in 2008. The 27 year old will need to show something in the last month in order to remain with the Rockies Organization moving past this year.

The other name that was called up was catching prospect Jackson Williams. Williams was also called up on the 27th and made his Major League debut on the same day. He ultimately wound up going 1 for 2 with a walk and a strikeout. Williams was a former first round selection of the Giants and played within their minor league system up until this year, when the Rockies signed him to be a backup catcher at the AAA level. He is a solid player, but like most catchers, he leaves something to be desired with the bat. Solid all-around player, and will be looking at this next month as an audition for next year as he tries to remain employed as a professional baseball player.

When the Rockies expand the roster, they will ultimately be looking for help for their beleaguered pitching staff. That help could come from Kraig Sitton, the tall left handed reliever who spent this year at the AA level with the Drillers. He put up solid numbers this year with the Drillers as he had a 3.68 ERA over 48 appearances on the year. Those 48 appearances stretched over 66 innings while he walked just 24 and struck out 43. He does not have over powering stuff on the mound, but can work the edge of the zone and get a lot of weak pop ups and grounders. Other arms that you will probably see in September would be Jon Gray and Eddie Butler.

Gray is currently on the 7 day DL, but could be called up to make his debut on the mound later on in the month. It has been an up and down year for Gray as he has either been really good, or really bad, and has struggled to find the middle ground between the two. On the year he is 10-5 with a 3.94 ERA. In just over 124 innings of work, he has struck out 113 batters while walking 41. All around decent numbers for a sophomore campaign, but he was looking to dominate this year, in hopes of making an impact at the Major League Level. Butler too has had an up and down year. He made his Major League debut with the Rockies earlier in the year, but did not fare well in his short stint with the team.

He made a spot start in June and was roughed up allowing six runs in 5 1/3rd innings of work. He will be looking to bounce back and prove that he belongs in the Majors. Combined on the year, he had a 6-10 record with a 3.99 ERA. He showed good command of the zone as he walked only 37 in over 117 innings of work. Butler pitched with Modesto, Colorado Springs, Tulsa, and with the Rockies this year, so he has seen a majority of hitters and talent levels and has had to make a lot of adjustments to his game throughout the year. Look for Gray and Butler to be in the running to make the team out of camp next year and could easily be a #1 and #2 starters in the very near future.

Offensively, the future is bright as the Rockies farm system is chalked full of talent in the infield and outfield. Players like Correlle Prime, Christian Adames, Rosell Herrera, Kyle Parker, Trevor Story and David Dahl. When you talk about the future, these players will be a huge part of it as long as they continue to develop the talent that they have displayed this far in their professional careers. Correlle Prime broke onto the scene this year with Asheville as he hit .288 with 21 homeruns and 100 RBI through 126 games. David Dahl had a .302 average with 10 homeruns and 41 RBI also for Asheville. Both Dahl and Prime are only 20 years old. Adames had a sip of coffee at the Major League level earlier in June as he played in one game before being sent back to the minors. Combined on the year he hit .291 with three homeruns, and 52 RBI.

Rosell Herrera has had a down year this year and has been battling injuries throughout. In limited action he has a combined .244 average with four homeruns, and 23 RBI for high A Modesto. Kyle Parker also saw limited time at the Major League level this year, but ultimately spent the majority of the year at the AAA level. On the year he hit .286 with 15 homeruns and 72 RBI. He is a typical corner outfielder in the fact that he has good power and can hit for a decent average. Does not possess great speed, but the former college quarterback at Clemson has a cannon from the outfield. Trevor Story is a name that you will want to familiarize yourself with right now. He has mountains of talent and if he can harness it sooner rather than later, then you may see the Rockies start to listen to some offers on prized shortstop Troy Tulowitzki.

Combined on the year, he had a .265 average with 14 homeruns, 48 RBI, 22 stolen bases, eight triples, and 26 doubles. As you can see by the stats, the sky is the limit for this 21 year old, as long as he can learn to become more patient at the plate and start taking pitches the other way. He has struggled with strikeout in his young career and this year fanned 140 times in 454 plate appearances, which is much too high. Should he rein this part of his game in, then he could grow into one of the best players in the game of baseball. You will most likely not see the majority of the players mentioned here in September, with the exception of Adames and Parker as they are already on the 40 man roster and could find themselves on the team by the weeks end.

As you can see, the future shows signs of hope despite the rough season that we are enduring this season. If nothing else, then at least the last month of the season will give you the chance to become familiar with some new faces, and say bon voyage to some others, because when spring training rolls around next year, this team is going to look very different.

Dave is a Sports Administration Major at the University of Nebraska at Kearney. He interned for the Denver Nuggets and the Colorado Avalanche Group Ticket Sales departments. He's worked as an Event Manager for the Gold Crown Foundation. He has worked in sports through all facets of the game, and with Youth, High School, College, Minor Leagues, and Major Leagues at all different capacities.