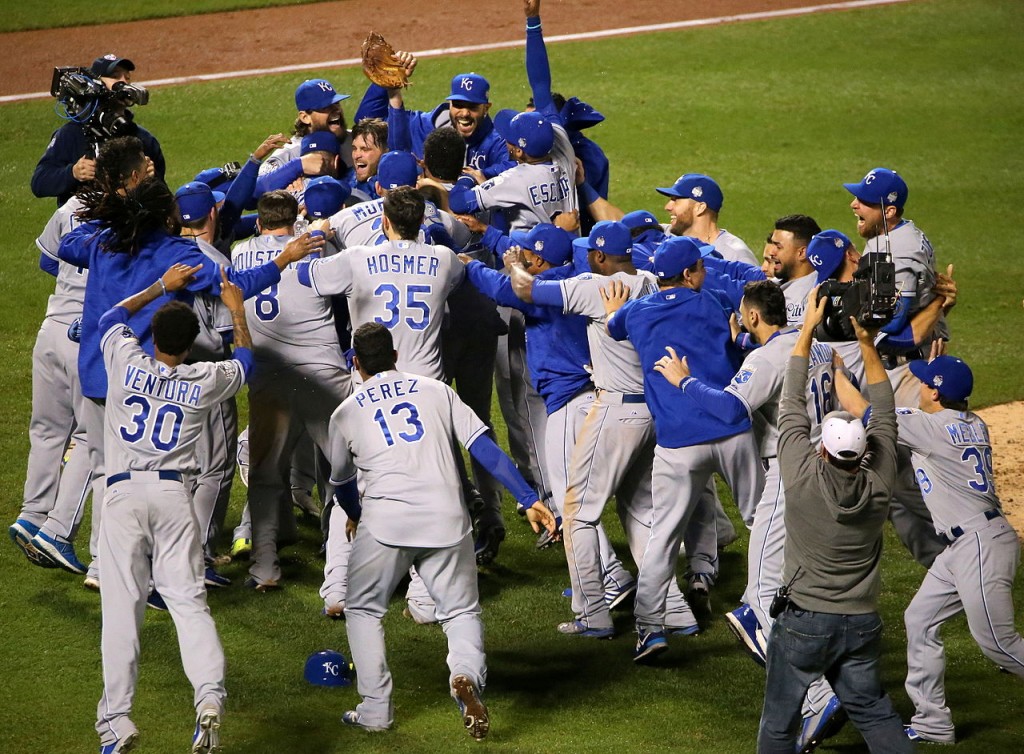 The 2015 season in Major League Baseball was one that was wildly unpredictable and thrilling. 2016 should be a good one to follow.

From seeing the World Series crown return to Kansas City for the first time since 1985, seeing teams go from rebuilding to contention (Cubs, Astros, and Mets), seeing Bryce Harper finally become the MVP that many thought he would be, and seeing one of the most exciting Cy Young races in recent memory take shape, 2015 was a season that left many stories that will be told to the next generation of fans.

But now, as everyone thaws out from a cold winter and the baseball players flock to Arizona and Florida for Spring Training, it’s time to look at six-storylines to watch for in the 2016 season.

The Royals came into the season with much swagger after coming a few close calls from winning the World Series the previous season. Now the swagger is even higher. KC looks to become the first team since the Yankees from the late 90s-early 2000s to appear in three straight Fall Classics. Many also feel the Royals successful stretch is heading into its dusk.

The team also will have upcoming players such as 1B Eric Hosmer, OF Lorenzo Cain, and 3B Mike Moustakas all about to hit the free agency market in the next few years, the Royals know the nexus of their latest period of success might not be around much longer and don’t want to waste time.

This Cubs team opens up as World Series favorites, (10-1 Vegas odds) as they look to win their first World Series since 1908, and erase the pain of 1984 and of course Bartman (just to name a few bad memories, sorry Cub fans). The North Siders, have the talent and a great mix of young energy and veteran leadership to achieve this task.  Not to mention, possibly the best combination of front office personnel and coaches, in the game today. Chicago also got more versatile and deeper with the pick up of utility man Ben Zobrist and landed the most prized player on the free agent market this offseason in OF Jason Heyward giving him an eight-year, $181.9 million deal. The team still looks to hammer out an extension with Arrieta (22-6, 1.80 ERA), but if he has another impressive season it won’t be cheap.

The Astros are not a team that should be glossed over as well. After losing 100+ games for three straight years and 90+ in 2014, many thought NASA would be on Mars by the time the Astros would become relevant again. However, after loading up the farm system with talent, Houston became AL West Champions (still weird to say AL with the Astros) using young talent and a batch of analytical methods. The team looks to have a lockdown closer this season after trading for Ken Giles (15 saves, 1.80 ERA) from the Phillies.

Houston has the rotation and lineup to make teams beg for mercy. The bullpen was reconstructed before last season into one of the most dominate in the AL and with the addition of Giles the ‘Stros look for a deeper playoff run (especially after their collapse against KC in the ALDS) and follow the path of the Cubs.

Arizona also took another big swing over the winter by trading a plethora of young talent to the Atlanta Braves for pitcher Shelby Miller. Despite playing for a Braves team that went 67-95, Miller pitched well. Going an unspectacular 6-17, but had a 3.02 ERA and a 1.247 WHIP. Arizona President of Baseball Operations Tony LaRussa and General Manager Dave Stewart hope this one-two punch could propel the Snakes to the top of the NL standings.

However, remember it is an even number year. Judging by the last 3-even years, this season might end with a Giants World Series win? The Giants did their best this offseason to make that happen. After losing out on signing Greinke, the Giants settled for SPs Johnny Cueto (11-13, 3.44 ERA) and Jeff Smardzjia (11-13, 4.96 ERA). San Francisco also signed OF Denard Span (.301 BA/.796 OPS) to give the lineup a spark. The Giants last three-titles have been built on a foundation of pitching and an offense that can just get the job done and that is what the Giants are looking for this year.

The Dodgers offseason was headlined by some changes in the dugout, as the team parted ways with manager Don Mattingly, who had a 446-363 record in four-seasons with LA, but zero World Series appearances. The team hired former outfielder Dave Roberts to replace him. The Dodgers also tried to retool the on field product, with hopes of getting over the hump in October.

The Dodgers look to replace Greinke in the rotation with veteran starter Scott Kazmir (7-11, 3.10 ERA) and Japanese import Kenta Maeda (97-67, 2.39 career in Japan).  The team also will turn the reigns over at shortstop to baseball’s top prospect Corey Seager. The young stud, was called up late last year and showed much potential hitting .337 in 27 games and brought some energy to the team.

All of these moves have made the NL West an interesting division this season and the race should be fun to watch all season long.

Ortiz is the last connection to the curse-breaking 2004 Red Sox, and has one two-more rings with Boston since. Some would argue that after Ted Williams, Ortiz maybe the most feared slugger in Red Sox history. In fact, he is the only Red Sox player alive to be on three-Red Sox world champion teams (all other players were on the Babe Ruth led teams). While Ortiz did hit 37 homers last year, he did start to show his age in some areas; especially against lefties, where he hit .231 with only 8 dingers. However, he has been a great ambassador to the game and will always be remembered fondly by the Red Sox faithful.

Scully has been the voice of baseball for the last 66-seasons. The last correlation of the Dodgers from their Brooklyn days and has been on the mic for many moments from regular seasons, to the All-Star Games, to many World Series. Scully has seen countless Hall of Famers play. His voice has been the narrative of many fans’ summers growing up. No matter what team you root for, Scully has garnered the respect of everyone around baseball from coast-to-coast and the summers won’t be the same without him.

Enberg has also had a distinguished broadcasting career, which started in the late 1960s. Many may know him from his national work, of covering the US Open and the NFL.  However, Enberg has also been a great baseball broadcaster. Since 2010 Enberg had been with the Padres and also enjoyed a stint with the Angels early in his career. He also broadcasted many MLB games with NBC in the 1980s. Much like Scully, Enberg is a Ford Frick award winner and has been a treasure to both baseball and broadcasting.

The team has perhaps their best rotation since the 1986 title team. With young guns and the old (yet still effective) Bartolo Colon, this rotation looks to repeat its performance of last year and propel the Mets back to the Fall Classic.

The core of the rotation is young (sorry Bart), and is under team control for the foreseeable future.  The staff had a 3.44 ERA, fourth best in baseball, which is impressive considering deGrom, Harvey, Syndergaard, and Matz (the last two were in the minors for parts of last season) all have not entered their prime just yet.  As the season goes along it will be interesting to see if manager Terry Collins and the front office will put an innings limit on the aces or not. However, with a staff this young, deep, and talented… Watch out opposing lineups!

There are seas full of interesting tidbits the Marlins offer. First, the biggest (and some may say controversial) coaching higher this offseason was when the Marlins hired homerun king (*?) Barry Bonds to be their new hitting coach. The Marlins hit .260 as a team, which was eighth best in MLB last season. However, they are looking to do more in 2016. While everyone knows that Bonds knows hitting, but many question if it is a smart hire. From his people skills, to the media attention, to his commitment, these are questions that we will soon have answers to.

But, before they hired Bonds, Miami hired Don Mattingly to be the team’s new manager. Last year the team fired Mike Redmond as their manager in May and replaced him with GM Dan Jennings (who never played or coached in the minors or majors before). That of course did not work and now the team posses a more experienced manager in Don Mattingly.

As mentioned earlier, Mattingly and the Dodgers had much regular season success, but bottomed out in the postseason. However, now in Miami the pressure will be a little less and the squad will be younger. Mattingly has stated he is happy to be in a place that will allow him to work with younger players. This is certainly in upgrade for Miami in the dugout.

Other storylines for the Fish this season will include Ichiro’s chase of 3000 hits. The legend is only 65-hits shy and everyone in baseball will be rooting for him to get it. Ichiro is 42 years old, and will be the team’s fourth outfielder and veteran leader.

Also, for the team, they hope to get two- young stars back to being 100%. OF Giancarlo Stanton was sidelined after 74 games last year with a hand injury and SP Jose Fernandez (2013 NL Rookie of the Year) spent most of last year recovering from Tommy John surgery. These two are the most important players on Miami’s roster and both will be keys to making the Marlins competitive again.