New Faces Can Change the Rockies 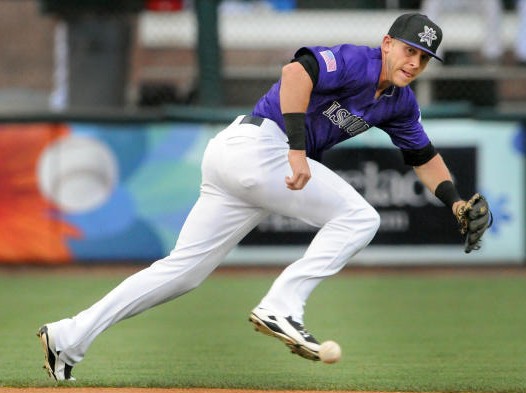 The Colorado Rockies are having a typical season full of frustration and inability to compete at the highest level. The team has added to its excellent minor league talent in hopes of re-writing its future. I wrote in an earlier article that one of those players is Trevor Story, a shortstop for the Albuquerque Isotopes, the Triple-A affiliate for the Rockies.

Story’s talent just might parallel that of a former player who the Rockies just traded, Troy Tulowitzki. The only difference is his ability to play the shortstop position. Scouts have noted that Story may be best suited for second base in the near future. Given the fact that position is filled with 2014 Gold Glove award winner, DJ LeMahieu, Story will have the opportunity to learn the shortstop position rather quickly.

Tulowitzki’s impact in an everyday lineup is statistically noted with the Rockies and now the Toronto Blue Jays. For any MLB prospect, the grind of making the majors is never easy, but once a player tastes “the show,” sustaining an impact sets them apart from others. If Story continues to hit and play solid defense, the Rockies will have no choice but to call him up this season. Let’s rephrase that, he must be called up before season’s end instead of waiting until the 2016 season. Clearly, trading Tulowitzki and placing Jose Reyes on waivers indicate confidence the Rockies have in Story as the shortstop for the next decade. Whether Story is key to the future or not, the franchise has arguably more depth than they have had in the past.

Jeff Hoffman, Miguel Castro and Jon Gray provide an interesting proposition for a starting rotation that has more holes than Swiss cheese today. All three pitchers give the Rockies flamethrowers, which they have lacked for at least the last five years since Ubaldo Jimenez. For the Rockies to succeed as a pitching staff, re-building the rotation and bullpen is the first order of business. The team must add multiple arms in the bullpen and starting rotation, which can hurl 95-98-mph consistently. Gray has the upper hand on Castro and Hoffman, since he is in the big leagues currently and pitching rather well. Much has been made concerning the 24-year old Gray’s restricted pitch count thus far, but this controversial decision should bode well in preparing him for next year and beyond. He just needs experience to develop consistency, as he has struggled with command issues the past few starts.

The Rockies have been successful in developing certain non-pitching depth in its minor league system. The franchise is finally in the position to elevate promising pitching talent. One thing is for certain:  Until the team succeeds consistently, it will remain in the cellar of the standings. Something needs to change.